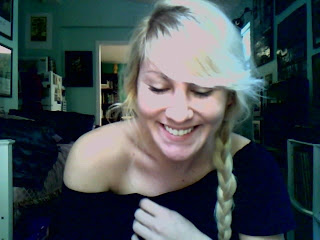 lately whenever i go to bed, lately in this little house, when it is in the early ams and i try to fall asleep, and there is a ghost tapping and talking beside me until all hours of the morning, lately when i try to fall asleep the world begins to feel like an abrupt end. the world feels like it is disrupted like something drastic has happened behind me and i cannot turn around far enough to see. i never turn around. never. the other night i am walking on the driveway of my grandmother’s old house, the one with the red front door and the maze of oak trees and azaleas, and there is a chubby-cheeked boy on a red tricycle that looks identical to my little brother. he is pedaling faster and faster, just like Nick would, the two wheels of the back tumble over the front and the face identical to my little brother’s shatters on the concrete. I wake, though i was not fully asleep to dream, I wake to tell the ghost, and it never felt like it ended. the room was still the room, the outer scope of the world of the dream. the peach trees still scratch the skylights and sound like crawling fingers up the walls. lately i dont sleep at all.

i lay on the floor and read gregory corso poems and i type poems on my typewriter that i would never let anyone see. i think of corso’s long hair and my friend’s long hair, the last time i saw him, and how sad it made me. i imagine the sea-shapes of the world around me, the fruit trees and the aging faces of the few people i love and i know that my life has consisted, intricately and deliberately, only of these things. no matter what land lines and connections i try to match point by point, no matter the energy and electricity i think i feel between the pages of people my own age, it is never, in the end, the true parts of my life. most people do not become my ghosts. and being here is like being a dead man on the sea and seeing an island behind me, as a place i once used to lay my head, barren with people i could not get too close to. and maybe that is just how the world works— we are just a layered space of time and energy, just ghosts for centuries passing through one another, with only those few idle moments where we stop long enough to feel the breath on our necks.

a few weeks ago when i was still on the island i had a sad dream about my long-haired friend. we were in this terribly old, ornate hotel— a place where my dreams usually like to go. sometimes to masked parties in the courtyard where the women wear gauzy white gowns and float between the maze of hedges and sometimes in the rooms that are sad and shaky. in this dream my long-haired friend was on the bed and he was not the person he is but the person i always thought he seemed to be. it was bright and the windows were bare and we left and we walked and talked and it felt like i always thought it could feel, in my subconscious imagination, it felt like i pretended it felt in real life for years. we went to my little house and walked into the bright little jewel case, and my brother was standing there and he showed me this way to turn my house into a shadow. suddenly the grey gaze of the world settled on the air of the room and everything looked made of dust, including my friend. standing in this house of shadow, with him shifting into a shadow himself, and then just shrugging softly and disappearing into the walls.

i rode my bike for a while this morning. i went out alone along with ambling cypress and the white light of the sun and i closed my eyes and suddenly and finally felt okay with being a loner and that living as a shadow for a while is the only way to get out and get away from the things you have to leave. and really, for me, ive never thought about how happy i used to be, but instead, and always, about how happy i am going to be. i know my past and i find it dull because of my absolute relation to it and i feel burdened when my emotions outlive my logic and my immediate world becomes this fragile, sinking thing and there is only enough left to carry on my back and keep moving. it never turns out that i make the same decisions someone else would make or that ive followed in the footsteps of anything. lately, most all these old lines have been lost or cut away and just like the two most significant points in my life so far, ive had to walk out of the room alone.
Posted by kristenclanton.com at 7:48 PM