the 3 things that made me care about school. 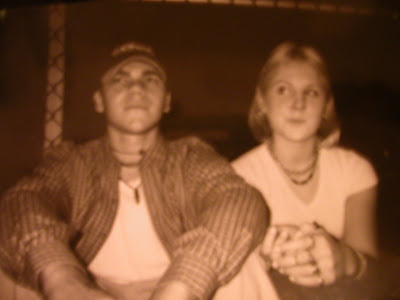 nothing terribly formal will be discussed here. more so, it is that old thought walking around in my skull, pounding over and over, that there will always be loop holes in my brain. parts i will need to pound in bit by bit. and i do. i read more than anything else in the world and mostly i read so much because it takes so much for me to hold on to anything. i want to learn things and make them a part of me, the only way i feel i can do this is by knowing from every angle. but i cannot do this if i do not see the relevance. especially if it is something i do not find terribly useful to know. an example of this is both my parents will tell you that even though i am left handed, i still look down at my hands when someone asks which direction is left. but i always always always know which direction is north, which means i can always find my path. i know this and not left because north is not on me like left is. north is not something i physically carry, but instead a tool i picked up along the way. this is a minor example, but it relates strongly to my patterns of learning and education.

there are only 3 things in the world that made me interested in formal education. these three things happened in a span of a month. an exact month. and here they are in there fullest:

one. manny died. prior to this, manny pushed me to write more. he would listen to my poems and stories every night and i would listen to his. when he got caught with weed and expelled, he pushed me to leave leto, with my 1.9 gpa, and apply to blake's writing program. i got in. twice. my sophmore year i was kicked out before school began because my gpa was below a 2.0. because of getting a d in a summer school make up math class. my junior year i got in and while at that art school i brought my gpa up to a 3.6. then i went to hcc and did not care again. i could not connect to anything. and then manny died and it was worse. i withdrew from classes and failed the rest then

two. exactly two weeks after manny died i was sitting in the hcc cafeteria writing him a letter about how sad i was, how i had to ask someone the date, how i could not handle a lot of things. while i was in the cafeteria deciding if i was going to actually go to science class and take a midterm i knew i would fail, there was a lot of noise going on. a lot of people were moving tables and setting up a strange stage. this really happened. it turned out the school had hired someone to put on a trivia game show in the cafeteria. they passed out buzzers to everyone and as the trivia went on the top four gamers would come to the stage and battle it out for 200 bucks. i needed 200 bucks. so i played. i made it to the stage and decided to skip my science midterm because i needed 200 bucks more than an f. and i won. and and the science midterm ended up being postponed anyway. this really happened. it still feels like some nutty sequence of events. and then

three. i enrolled in british literature, taught by valerie sadd, which focused on transcendental philosophy. i honestly feel that transcendentalism saved my life. for me, that class was like going to church. it was the only way i could feel anything remotely positive, it was the only way i attained hope after manny's death. and by reading prufrock and manfred and about the daffodils, the world started to make sense. i would not talk to anyone about manny but transcendentalism gave me some sort of language that i could use to comfort the parts of myself that hurt. transcendentalism gave me some kind of happiness despite the pains of being mortal. and from then on, i cared about school. it was the only thing i cared about, and i got straight A's every semester, even every semester of the mfa program.

so to me, education is not only a passion, but an intuition. it is the constancy of being a student. i think i will always feel this way. i have never been the know all kind, but more so the be all kind.

Posted by kristenclanton.com at 9:25 AM