on warhol’s marilyn, or why icons make icons. 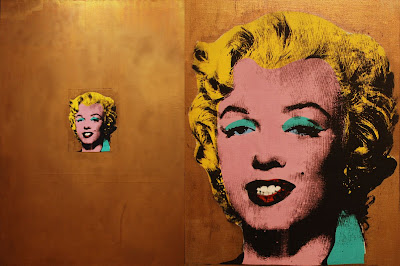 having heroes like andy warhol and edie sedgewick is probably a terribly reckless thing.

but having icons like marilyn monroe, debbie harry, dee dee ramone and johnny thunders, jean harlow and clark gable and richard hell, may be all the more inviting for an end of the world mentality. at least from one point. no one living even thinks about death except for those moments when the living has halted and there is some point in space to think about the points in space that have come before.

i write everything down. i have kept endless journals since third grade, not because my hours were blowing my mind, but to work out the world, to cut up the ghosts and devils and sort them out line by line. i write to figure out the next part and mostly, at least at those moments when all that hero worship starts to fail, i listen to what i am saying. often years will go by and will i have written the same situation over and over. usually i do not realize this until much later when sentiment starts to get the best of me and i think a return to those parts is best. my journals talk me out of this. every time.

today is andy warhol’s birthday. if anyone knows me, they know my absolute obsession with warhol and early punk like the ramones the heartbreakers television blondie suicide patty smith the velvet underground the new york dolls etc. i rarely listen to anything else or have really liked anything else since i was fifteen years old. mostly that means i dislike modern culture for the most part. mostly that means i dislike modern music. i really do.

there are other bands, like esg, that i cannot remember with such immediacy, that i really truly love, but for the most part i was a damn terrible band mates girlfriend because i have not liked most music post 80s.

it’s true. i didn’t. i despise bands like animal collective. the only sonic youth song i like is their cover of the carpenter's "superstar". modern music is damn boring, which is an overdone mentality, i know, and i should not be so harsh in black and white, i know, but it is no matter. i try. it's true. i can't. ride in a car with me with the satellite radio on . i'm terrible. i don't even have a radio in my car because i would annoy myself with agitation.

why the hell aren’t bands covering songs that used to suck? why are bands (and directors for that matter) reproducing art that decimated everyone the first time? why not be like jay z and redo something lame like shirley temple and make it damn cool? why not make the world to where the original is an absurd and half-formed distraction? 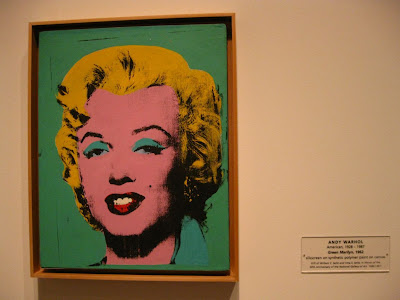 anyway, here is the point: yesterday was the 50th anniversary of marilyn monroe’s suicide. today is andy warhol’s birthday. that means that marilyn monroe, one of warhol’s imfamous idols, committed suicide the day before warhol’s birthday. monroe was 36 when she died and warhol was turning 34. warhol got a tremendous bit of backlash for producing his marilyn prints right after her death. people still consider it an ultimate exploitation of her death. but think about it. you don’t even have to know anything in the world about warhol to think about it.

it must be a strange feeling for an icon to commit suicide the day before your birthday.

all the backlash, but no one beats up the blondes that became their own reproductions of monroe. what about all the physical manifestations (jayne mansfield, mamie van doren, lindsay lohan, anna nicole smith, etc)? it is all the same sleepy cat eyes, blonde halo of curls and slightly parted lips. all that well-known sex and symbolism. we all know the formula. it is the same iconic face. the same constant components that warhol pulled out of the world immediately after monroe’s death. he pointed at these parts to distraction. and here we are still pointing at those same parts and making them parts of ourselves over and over and over still beating up the dude that started the march. and we are all marching. 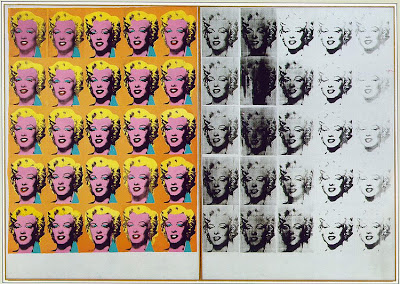 Posted by kristenclanton.com at 2:16 PM