On Czeslaw Milosz and "I Sleep A Lot" 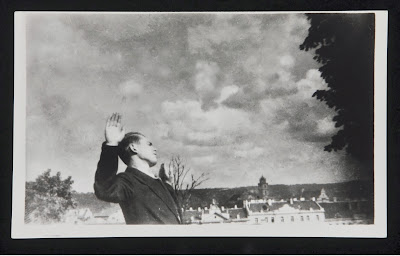 One of the first poets that I ever became absolutely mad about is Czeslaw Milosz. It's not only the World War II background and the Polish resistance, or even that he became a professor with nothing formal, only history, language, intelligence and articulation on his side. I have been absolutely wild about Milosz because of the things I can only imagine that he has seen. His poems are just fragments of a cumbersome and somber image, one that shifts and fades as time tumbles on. In his collected works, each poem is beautiful and crafted and subtle, but it's the pages and pages of footnotes that actually tell the stories, in all of the brass facts, of the people that died; the people that Milosz created a space for within our history books and within our books of poetry, so we will remember the atrocities they suffered. And Milosz is not cruel. He doesn't sell the images of the brutality he witnessed, instead, his dead seem canonized. And this is so unlike modern works and modern poets who layer on the brutality of a world they've only imagined, a world they've seen in pictures, and then they write about it. And those false pictures are supposed to mean the same thing, but the idea of the thing is untrue. I want to believe it. I want to be moved by the thing, and more often than not, if I cannot feel it, then there is nothing in it for me to feel. I don't mean that the story has to be real, but the world and the characters and the thoughts and idea of the thing have to be greater than the horror or the romance. there has to be a heart. And I cannot be the only one that wants to read this-- even Bukowski, who write about nothing, is true.

On days like today, when I'm tired or when I feel like I cannot even connect to the things and the people I know that best, or when I feel a little defeated with my own direction and my own momentum, or when I feel like maybe I'm not true enough, I always recite Milosz's "I Sleep A Lot" in skull, over and again, like an incantation or an ohm. and eventually, it feels like I feel nothing.

I Sleep a Lot

I sleep a lot and read St. Thomas Aquinas
Or The Death of God (that's a Protestant book).
To the right the bay as if molten tin,
Beyond the bay, city, beyond the city, ocean,
Beyond the ocean, ocean, till Japan.
To the left dry hills with white grass,
Beyond the hills an irrigated valley where rice is grown,
Beyond the valley, mountains and Ponderosa pines,
Beyond the mountains, desert and sheep.

I feel a pain.
not here. Even I don't know.
many islands and continents,
words, bazaars, wooden flutes,
Or too much drinking to the mirror, without beauty,
Though one was to be a kind of archangel
Or a Saint George, over there, on St. George Street.
Please, Doctor,
Not here. No,
Maybe it's too
Unpronounced

Please, Medicine Man, I feel a pain.
I always believed in spells and incantations.
Sure, women have only one, Catholic, soul,
But we have two. When you start to dance
You visit remote pueblos in your sleep
And even lands you have never seen.
Put on, I beg you, charms made of feathers,
Now it's time to help one of your own.
I have read many books but I don't believe them.
When it hurts we return to the banks of certain rivers.

I remember those crosses with chiseled suns and moons
And wizards, how they worked during an outbreak of typhus.
Send your second soul beyond the mountains, beyond time.
Tell me what you saw, I will wait.

Posted by kristenclanton.com at 3:55 PM

Your citation of Milosz's "I Sleep A Lot" preceded with your comment that "...and eventually, it feels like I feel nothing." is, I suspect, where you align with Milosz's intent--as it intersects with your comment about your feelings, that what you said is that you feel a little defeated or not true (enough), you really intend to say that the mystery of the second soul, eclipses your anxiety in its invitation to look deep.
...
Send your second soul beyond the mountains, beyond time.
Tell me what you saw, I will wait.

Thank you for your interesting comments