how i realized that the absolute is an impossibility.

so i haven't written a blog for a long while, and this has mostly happened because tim & i have been living at other people's houses all summer, and with living at other people's houses, comes taking on other people's responsibilities and, in a tremendous lot of aspects, it means taking on other people's lives. for the most part, we are very good at these things, but when it comes to summer and the want of freedom to, you know, just drive away for a weekend, we can't do that because there is some small white dog in some big house somewhere away from our own lives & home, and we have to think about that. & believe me, there have been multiple small white dogs this summer-- this is  no metaphor.

along with that though, comes all the strange new things we get to do when taking on other people's responsibilities, but mostly, it has only made my wanderlust even worse, and i constantly think about places to move to and what kind of person i am. meaning, i constantly wonder if i am really country mouse or city mouse. i think i'm both, which only furthers the dilemma of where to go, which probably isn't a real dilemma at all because i've become committed to going on farther than this MFA and actually attain my PhD in Literature. if anyone knows me in real real life, then one knows that this is something i've been a loon about for at least 5 yrs because i am really really terrible at pressing myself farther than ideas; if the plan is set, i am fantastic at plotting the points and surpassing every one of those sign posts, but if there is no path. oh, man. i get lost in the forest in my skull. luckily, something that has happened this summer is that tim signed me up for the GRE and has been tutoring me, which sounds like a real life bore, especially on Sunday afternoons, but i just keep thinking that if we both have our doctorates, and we both teach, then we will both have four months off a year. and that's damn stellar.

in other news, a few weeks ago, tim and i adopted this tiny, junkyard kitten. oh, was she a tiny beast. she was afraid of everyone, and at first we thought her a boy, so we named her Jack, but now since she's kind and lets us pet her, we know that she is, in fact, a lady, so we named her Layla. 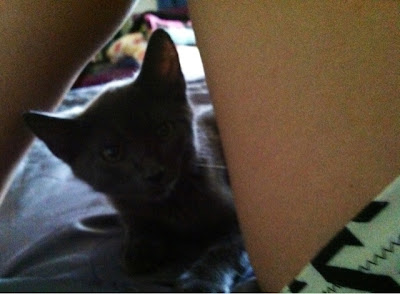 i dig her. she's playful and she appreciates things, and I think this is because she is a junkyard kitten. when we got her, her spine jutted out, but now she is a round little thing. but this little thing made me think of all kinds of other things. aside from the strange feeling i had that now that we had a cat we were tied down (yes, i realize that pinning that onto a small kitten is silly), i now feel like we live in a matchbox. when i first moved into my apartment, it was perfect for me. one small woman with a huge wardrobe and library. then my giant husband moved in, and even though he is far too big for that apartment, he handled it all in good grace. but the kitten, wow. we three animals are too many for that place. but after staying at these enormous houses, i miss my little matchbox; it's clean and organized and there's not too many things anywhere. i like that.

tim has been baking me a lot of things; last night we babysat, and tim and sophie made cookies. 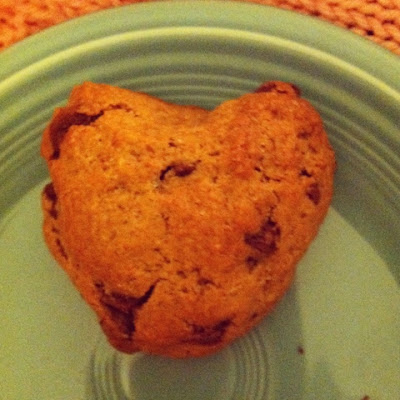 and friday he made a pineapple upside down cake. all organic and no sugar and it was awesome. 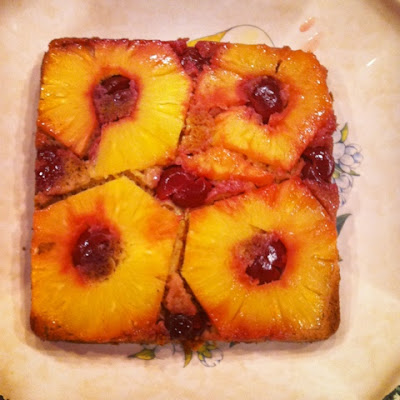 lately i have been working on flash fiction stories. studying. teaching. and looking forward to the ten days off i will have between the end of the summer semester and the start of the fall. i organized a writing workshop group, and it's going well, except when i get too many ideas my brain turns to mush and i have to take a while to think about other things, which has worked out well because i've had the GRE to study for and syllabi to make.

i cut out 2 of my 4 jobs, so i am only teaching five classes in fall, which makes me happy because i will have time to write, sew and study.

i've been having strange and terribly intense dreams. dreams that happen and i wake myself up by talking outloud and then i think i see the thing i just dreamed of. even after i blink, it's there, hazy blurr and dark for a moment. i think this has something to do with the stories i'm working on. i have also been having disaster dreams; dreams of being taken over by waves and dreams of being pushed into volcanoes. for the first time, i actually dreamed that my teeth were falling out, one by one. big white beautiful teeth, whole, roots and all, completely sterile looking things with no blood or pain, just that feeling that makes you cower, that lack of self esteem. there are many reasons for teeth dreams. no of them correlate or make sense.

i've been getting a lot of calls i don't know from cities i've never been to but where people i used to know now live. no one ever leaves a message. it seems like if you make the call, you should know what you're going to say or what you should say.

lately, my parents have been telling stories about me. stories that i never in a million years thought that they would remember, things i never remember hearing them say before. i've been around other people's families, and i always liked hearing those stories they would tell me about my friends. sometimes, they made sense; my mom tells stories about hurricane parties and how i locked ten cats in my bedroom days before the storms were even supposed to come to be. i remember nick and i having all of our friends over, but i forgot that i did that. and it all made sense to me.

when i was small, i had this terrible terrible terrible fear that if i didn't do something or appreciate something as much as i could, then the moment would pass and i wouldn't have the chance to do it again. i was dead set that there are no second calls. catching cats days before was only because of the luck i had of catching them the first time; crying christmas night because i loved my family so much, i didnt want another christmas to pass because it would mean one less to look forward to; and losing that little green glass frog my great grandmother gave me when i was six, and losing it, and still dreaming that i have found it, and waking and going to look, are all the exact same thing.

i've always always loved the things around me. so much so, that those things can easily break my heart, depending on what kinds of things they are. and fear is a major part of that. for a long while, i never understood why people fear God. i always understood God as love, and maybe, for me at least, it isn't the fear of the absolute itself, but it is the fear of the world slowly shifting into the shades.

the same dinner my mom told the hurricane story, my brother and i talked a long long time about my grandmother and how absolutely amazing she was. he told me a story about how when he was small, grandma had this plastic jar on the island in the kitchen, and it looked like it was full of hersey's kisses. he thought he would be sneaky, and he stole a huge handful and shoved it into his mouth, and it turned out to be dog food.

yeah. and this lead to other stories. stories of that time we found a boy's wallet and were able to return it to him. walking through the woods and finding a tree behind the Baptist school that was stuffed with porn, and nick throwing it into the creek because it was funny. because it was probably what we were supposed to do and i was glad he did it. eating screwballs and crushing cans to take to the recycling center and using the money to see movies with grandma, and grandma sneaking hamburgers into the theatre in her little black purse.

and there are millions of stories like this, and if we don't tell them to each other, they'll be gone. when i have kids, i want them to feel like they know their great grandmother, and how much she truly had a hand in developing the people that are in my family. how all of that is endless. that endless feeling takes away the fear. it makes the absolute an impossibility.

Posted by kristenclanton.com at 4:34 PM

I just re-read this for fun and because I love you. It's fun to look back at history through a blog, and it's even better to read things from your perspective. You make me laugh when you make a joke, and you make me laugh even when you're not trying to be funny. Reading this is like taking a ride with you in your little, white Volkswagen and looking out at the world, just like we do every Sunday afternoon.