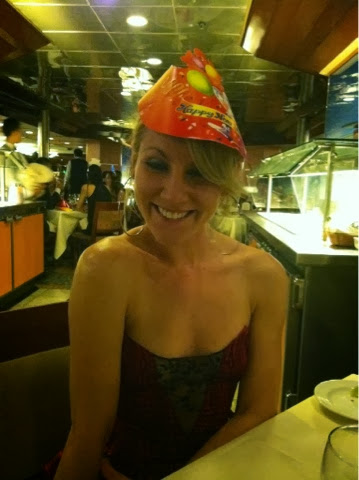 most every New Year, with the exception of last year, when I was on a cold weather cruise ship in the Caribbean, at some point in the sea where my telephone worked, and I could dial Tim, who was working in a liquor store on 40th until 3 am, and didn't believe I was calling, that I cared enough to call, that I missed him and that I was alone. The part about being alone on New Years is the part he mostly could not believe. That I was dressed in a sequin party dress, alone on a dark dock, watching the sea waves come to me, was beyond him. That I wasn't drinking, that I was bored, that I would rather be working.

Tim didn't believe that every other New Year, I usually sleep through it all. most years, I take a sleeping pill, turn my phone off, and wait for the night to end. last night we went out, and Tim said that I was going to be the first person that he's kissed on New Years, and I told him that he was  mine too, and he still didn't believe me.

but the truth is, I hate New Years. every other New Years, I was over the year, the holiday, the people and the parties. I was over the booze and the things people did and forgot; I was sick of the girls with the caked on make up that would lock themselves in the only bathrooms at parties because they drank themselves dull. I was sick of the sad holiday songs, which were really about the death, the end of things, another year gone and done, another year we are all the same, doing the same things, red faced and slick lipped and pretending all the same. and the worst of all those songs is "Auld Lang Syne", which really just rips my heart out.

Every other New Years, I am sick of myself, the people I know; I get sick of what I'm doing, where I'm at, what's around me, and all the dumb things I did and hoped for. I just want to sleep through it all and then wake up on year one month one day one with my list of ten things to do. ten things I won't do anymore or things I will do from then on.

These lists have been about every year, and every year, I succeed in at least 7 of the 10 things on the list. and I truly, absolutely believe that the compilation of these lists made it do that 2013 was the best year of my life, and that when New Years came around this year, it was none of the dread, it was really just an extension of the same year, the same easiness and happiness. I got rid of all the rotten parts over the past 3 years, and now, I am only surrounded by the things I find steady and intricate and pure.

and that's important to me. I am a woman that is obsessed with the pure idea. even though I am apt to believe that Reality is a series of moving parts that can only create a static space, it's the pure idea of people with spirt and will that have hope and the definitive moral to keep moving, to still make things beautiful and whole within them selves. art and life are absolute replications of the self, and if those separate parts can't fall along the same plane, then there is something untrustworthy, something impure about the process.

New Years may have taken away that plunging hostility, but I still make the list. the list is always an attainable hope. so here's my ten to dos for 2014:

9. don't take Tim for granted. nurture the vitality &magic of our relationship.

8. don't miss out on opportunities: pay attention to everything I love.

5. stay out of meaningless debt.

3.  write every day, &not just high seriousness. write for fun too.

2. study &submit. give care to work in the home, in the classroom, in the mind and in the heart.

Posted by kristenclanton.com at 10:53 AM

A nice read! Congratulations! You're gonna be a great Mom!