on the growing disparity between thought and action. 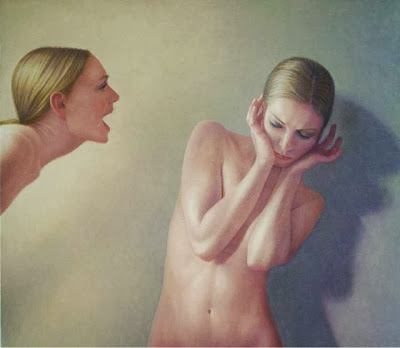 even though my work revolves around language and ideas, I find myself believing less and less in their relevance. every day, it seems like I read or hear something that is so contradictory to the nature of the one that is saying it. a few hours ago, I read one of the worst, most elaborate racist rants on a social media cite. I went to the proud racist's profile page, and he had all this great literature listed, but mostly, it was people like Nietzsche and Dostoyevsky, writers that people tend to pull the wrong ideas from. this made at least a kind of sense, though it's always difficult for me to understand how someone that is educated can still be racist. but this wasn't the contradictory part. the contradictory part was that on this list, beneath this insane banner of racism, he had listed Ralph Ellison as one of his favorite writers.

seriously. I don't even know where to go with this. it's an extreme example of a common disconnect between thought and action. how does one not line up idea and language? how do thought and action become so disparate from one another?

and I see it everyday; not in such volatile way, but everyday, I ignore the disparity between someone else's words and movements, or I just ignore it or I don't hear it at all or I shake my head and laugh and think, yeah, that's the way she's always been, and that can't be right either.

Posted by kristenclanton.com at 9:01 PM

My favorite part is that the guy has a quote from Ellison, one of the strongest voices of the African-American literature movement. He probably just added him to his list of reading to sound intelligent