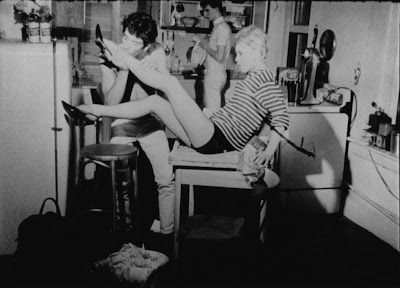 I started working on my manuscript about a year ago, and I've had this pressing, focal energy constantly at the forefront of the project. I've written six stories so far, and I've just finished the gigantic map of the next, which is a story I've been wanting to write for a while, but I've avoided it. Mostly, it's because the story is going to make me sympathize with a true-to-form devil, maybe two, and it may make me feel a little guilty too, which is something I've worked at keeping out of these stories.

There is no place for guilt in fiction.

Tim says my stories are getting more and more autobiographical, even though the sequence, or at least the downfall, is fiction. I think it's the character's response: that pursuit of the other side maybe, that doom I used to run to, full force. It's strange: at those moments in my life, I always knew they were untrue. That'd those moments would just become stories, and for a while, I thought that was cool. I loved to shock people with stories about things I've been through. But then I met some people. And I thought about it. And I think that it's probably a damn shame to be 50 years old and still living life in that compartmentalized way; still thinking about the stories you'll collect and the people you'll tell, but all those people living in the same way are dying in the room around you. And soon, there isn't no one left to tell your stupid stories to. What a wonder.

Ever since becoming a mom and probably a teacher, it's been easier to write about my history in a way that subtracts me from the scene. My writing doesn't hide behind abstracts anymore; now, it hides behind this banner definition of being fiction, and is that banner ever a freedom.

There is something comical to all of it: that misplaced, confusing sexuality present in every relationship, those insults that'll really knock you out when you are still searching for that thrill you can keep on repeat. I've always been the girl that laughed to keep from crying or screaming, you know, before things really spiraled. And in a manuscript, it really reads as a controlled hysteria. That's a wild thing to do. Makes everybody crazy.

So I've been reading biographies lately on those great hysterics in history: the ones who moved 15,000 miles an hour at ease with the rest of the world watching. I've been reading old letters, some of those mod poets, and realizing that most things are mostly only psychically difficult to leave. That brain can really take a hold, convince you it's everything else acting illogically.

For a while, I defined writing by Borges' idea that everything is fiction. And was I ever single-minded about that. He wasn't meaning that at all. Because does it ever go both ways. To leave it at fiction would be easy.

It would ignore what maniacs we all can be, the maniacs we inevitably become at certain points of fiction in our chronologies.
Posted by kristenclanton.com at 1:24 PM