This fall has been a bizarre season. No matter how much I tell myself that a single life is only one timeline, with a definite beginning and end, I can't help but constantly give myself over to that American idea of perpetually having the capability of beginning again. I think part of it is that I believe people can change. I mean, there are two ways of going about it: people change or they don't. And if I believe people change, then I have to believe I have the capacity to change too-- for better or worse. And man oh man, does the idea of ever growing worse startle me. I can't be the only one, though I may be in slim company of those who are infinitely conscious of it at most every moment, even in dreams.

One of the reasons I married Tim is because we speak the same language. He has the exact same capacity of the infinitely conscious fear of being one who grows worse. I'm not saying that it's because of, but maybe only informed by, that fear that he is pretty good at saying something I've never heard before when I need to hear it. For this strange fall season, Tim told me that the worst tragedies happen on otherwise beautiful days because it's the only way anyone could cope with it.

Throughout this strange fall season, with all it's dramatics moving in completely disparate directions, along with other things, I keep thinking of what Tim told me. Maybe part of it's poignancy is connected to staying in the center of things. When things get to feeling like you're being tosses around at sea, I hear the best thing to do is remain a stone. So for this strange season, I've tried my best to remain a stone. But even living in this little city, one can only really stay a stone for so long, hardly anytime at all.

I keep going back to that scene in Broken Flowers too. When Bill Murray is at the end, all busted up and broken, suffocating under the gravity of life and being, and all the repercussions that stem from both, and he's holding those terrible, cheap pink flowers. He's leaning against a giant old tree, squatting next to the grave of one of his last loves, crying. Whenever I picture this in my mind, it's raining. I've seen the movie at least twenty times, and the greens are so fresh, they feel wet with the weight of falling rain.

But it isn't raining at all. That's just the feeling. 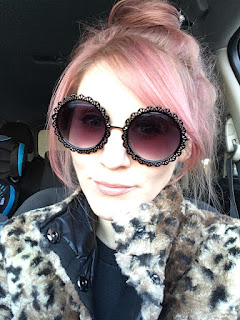 For the most part, outside my love for Tim and Langston, I don't know where I'm traveling. But I know I'm capable, and I know people love me. (I dyed my hair pink this month, and immediately, my wonderful cousin texted me, "Are you okay? It's pink not brown, but does it mean the same thing?")

I think art is inside/outside-- part of the time is collecting, the other part is creating. Sometimes the stages take years to navigate. This week I've realized that it's probably just time for the other side of things.
Posted by kristenclanton.com at 1:10 PM