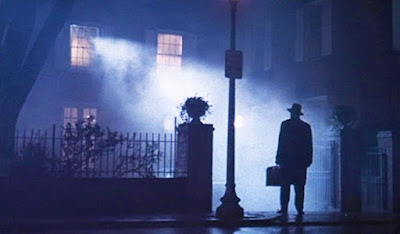 I've seriously dedicated myself to writing for about twenty-two years now. This doesn't include being a small kid writing stories and playing them out with my friends, making puppets or building sets out of the few things we could carry. I don't even really think much about the years I've consistently worked, exploring an idea to its (almost) end. I think a lot about that (almost)-- those times when I've abandoned a project completely and then didn't write much of anything for a year (or more) because I knew I had to work something out in my head. Or maybe it's more than that.

Maybe the first twenty years of writing was just getting out and getting over all the ghosts that haunted and hurt. The simplest, most personal realizations can often become the most profound. At the end of William Peter Blatty's The Exorcist, the demon is raging in the bedroom, assuming the voice of Damien Karras's dead mother, who Damien feels profound guilt over. He and Father Merrin are at the door, and Merrin tells Damien about his own loss of faith. Pretty much, Merrin says he has a difficult time loving everyone. He says that a lot of people actually disgust him, and he felt a loss of faith because God asked him to love. Then one day, he finally realized that he didn't have to actually love everyone, not even close. But he did have to act with love. It always comes down to the act.

I am often asked about how one can go about writing. If you read any book on writing (most of these books are terrible, minus Stephen King's On Writing), in so many words, they all say you have to meet the muse. Like Father Merrin's act-- or faith in any pursuit-- you have to be there, in the room with the pencil and paper, writing it all out. Eventually, you'll come to something. This is what I tell people because it is the easiest way to put yourself in the head space, to tap into that psychic energy you need to write. But as I said before, because of those (almost)s, I don't write this way. I'm more like Roethke: I take my waking slow.

I've been working on a novel for about two years now (those different two out of the twenty-two), and I'll pause for a month (or months) to work through an idea because I don't want to fall into the old traps. I don't want to get sick of myself. This time, I am willing myself to do something completely different. That difference has taken a considerable amount of clearing out the ghosts and internal clutter so I can write something in front of me and not behind.

And this is what led to the most basic of realizations: I've always written horror. Of those twenty years where I was writing what was behind me, man oh man, those stories and poems were bombed out and broken. I thought I was writing capital-L capital-F Literary Fiction, but it really started out as Gothic horror and then moved into gore. In poetry, I've mostly published Gothic horror. In fiction-- with the exception of the last two years-- it's all gore. And the gore is painful for me to read. Whenever I workshopped the pieces, I would always hear that the writing is beautiful, but the story hurts. And man, I loved that. But then something changed, and it got to where my own stories made me nauseous.

Because I only wrote about girls, and all the girls I wrote about were in monstrous situations and they couldn't get out. They followed the breadcrumbs because their was no where else to go. And I wouldn't let up. I wrote out the worst parts, the willing walk to destruction. I thought this was romantic (you know, Literary Fiction, even sometimes Southern Gothic), but I was really writing slasher stories where the girl had absolutely no power, and there was always a force (usually a stranger, sometimes a boyfriend, once a mom) that runs the girl to the ground.

I only recognized this because of the novel I am working on. I met a man on a bus who I could have easily turned into an active monster, which is far different than the threat of violence. I could have taken the power away from my main character, fallen farther into the world of splatter horror and out of the supernatural/paranormal. I took a month to figure out who everyone on the bus is, how I was willing to build force and vanquish it, and yesterday, I was finally able to write the scene. Afterwards, I felt like high-fiving my old self, and all those sad girls I buried in all those old stories.

Posted by kristenclanton.com at 8:04 AM