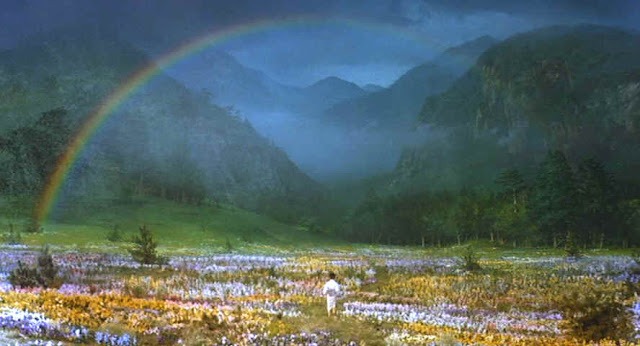 it's raining again today. on sunday the light was golden and it was warm enough to sleep outside in a bikini for hours, listening to the woodpecker and the little cardinals singing, until the clouds began to come back and the sky looked silver again. then it was back to looking though the glass, keeping the world framed in windows where all the gardens are cold and suffocating the worst for it.

lately i prefer to the to hear the things i don't understand. other languages and Sailor's mewing. and lately i've been meticulously counting my words. some mornings i wake up and wonder how many hours will pass before i have to say one. i wake up earlier and earlier to the dark blue sky and my little reading lamp. but always the first word is always wasted on someone i don't want to talk to. which hurts worse because i have already walked through three rooms and looked at the sad faces i should have said something too. it's terribly difficult to be the cheerful one when even the sky is dreary. my first word is usually wasted on this enormous, pink faced lady or someone else that likes to sing the bad news far too early in the day.

in the afternoons the words are on the walls and the battle of most conversation is painful and absurd and i don't feel like my perspective is aligning with the other. like my spectrum is having a grey day or something and just wants to go out, have a whiskey and talk about the girls on stage or something. my perspective does not want to be the focused study of someone else.

i don't give away words right now that could be cut open and pinned back, pointed at like little red, vibrating organs meaning this this and this. but still. it happens. rarely do i drink a whiskey with someone that doesn't have something particular to say. something i would like the better not to hear. and even more often than not, i feel like i'm sitting next to a bull on a barstool, trying to press me into this grand scheme or that big idea. nothing in the world makes me more violent than pressure.

because of this, or maybe in spite of all these bulls with all their ridiculous charts and graphs, i have been spending tremendous spans of times in dark rooms watching old films of secret agents, the samurai, contract killers and femme fatals. when i walk out my glass front door it always seems like everyone is all big plans and bad news. my dad's second surgery is this thursday and there's everything else, all of the silent parts of family that change so much that the past isn't even familiar anymore, and if i had to think about some great sadness, i would prefer it to be that one. that one or the tremendous one that all my favorite poets knew how to describe. knew what to say when the great sadness came along. even fellini always ended on a parade. even his whores smiled when it seemed like the earth was nothing but mud and pain and loneliness.

i bought an old european bicycle. something a girl in a dress in a godard frame would ride past on, something i could close my eyes on any golden day, i could ride around and pretend i'm in rome or paris. because some day soon i will be. and when i leave the house, all the words i hear will belong to someone else's history and i won't be able to understand them anyway. i can just smile then. and that would be enough.
Posted by kristenclanton.com at 9:34 AM