kristen and the love machine. 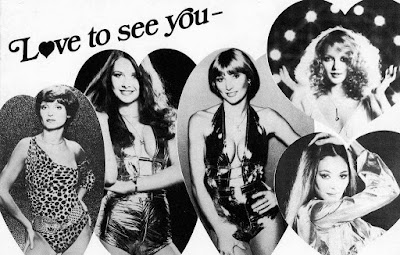 yesterday i woke up terribly early and spanned the day in my sewing room listening to surf rock and working on three dresses and a bathing suit design that is so super killer-- like if there was a cool mermaid cast on Dynasty-- like mermaids being bigger than Texas in Texas. or something. that kind of sex appeal. like when Jerry Hall went over to Paris and annihilated all their french beauties and took it all up as only a girl from Texas can. that kind of Texas. the other day i read this awesome article on contemporary art. it was about how Dallas is becoming this nutso enormous art community; how all the people with all the money (including this old dude that only wears purple and george michael's husband) all pooled their money together to build the most outrageous art museum and opera house and art collection (they actually buy art and split the cost and time of which each has it) and how even the Cowboy's stadium has an insane contemporary art collection. and that's sort of like watching television. it's like comparing the same photo when one of these things is not like the other. my mind wanders too much. i finished all three dresses and the bikini.

and hell, if i have ever been shot it was the first six months of this year at high caliber with a slow revolver one or two or three big bangs each month that left me with the lights off and if i have ever felt like i was watching television it has been this week with way too much going on in my skull, not in a rotten way or a sad way or anything like that more in an against gravity, correlated kind of way. so here is the thing. here is what i have been thinking about: 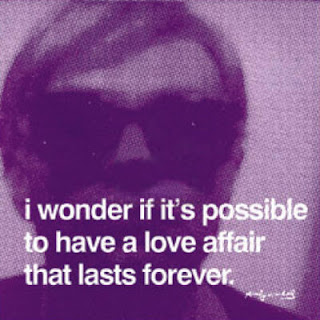 the construction of fantasy in relation to the frenetic construction of reality and its relation to love. or the fantasy of love and how the effects of memory alter love. last night smith and i went out and talked for ages and he is the only person that has known me in a day to day way since the beginning of the last end stop (the really bad one, the really mean reds). about four years ago i started to become obsessed with the construction of hyper reality and its effects on the actual. how we see something somewhere in space and how in reality we have a direct response (breaking up with boyfriends, taking lovers, these kinds) in reality. how everything is becoming even more subjective. and how those of us who know how to navigate the psyche of the hyperreal (or truly the universal subconsciousness) will ultimately be ahead of the game (it is like the difference between those who smoke weed and those who don't. those who do smoke function right as rain but they don't realize, and probably don't much care, that they don't realize everything that is going on).

and this extends to the constructions of love. say i meet a boy in real time. said boy talks and walks and winks and only knows me for my face and my body. boy knows i have blonde hair and i laugh alot and i am generally a happy, fun person. in real time anything else that comes up is like falling into quicksand. the world is an impatient place and often i date dudes in real time that really develop no interest in me beyond this point because this is enough. me being a remarkably secretive person, i do not readily tell things about myself in the slightest, so more often than not i tend to know people more than they know me, and at that point i get bored because no one just likes to be a shadow and i disappear. 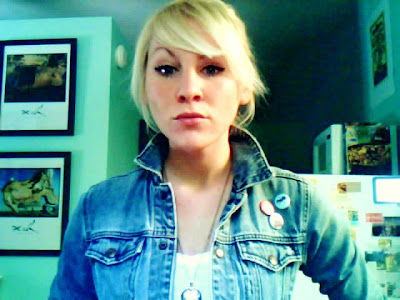 now construct the hyper real. make a projection that is a decent construction of the living self and this becomes an easy reference point. the small, dispersed parts of real time correlated to the projection, can really provoke that falling feeling. make you feel like you really know someone. not just a ghost. (it is a ghost) and it allows the object not only a body and face, but the fantasy is filled into the blanks. warhol also said, "Fantasy love is much better than reality love. Never doing it is very exciting. The most exciting attractions are between two opposites that never meet." the fantasy builds the girl into a real doll. and on to the after:


at the end of real time (after pulling the houdini) there is still the hyper real construction. the projection is still on the screen and the fantasy is still intact. only it become worse because you only had that fleeting real time-- the dark room the clothes the smile that one time-- and they become the fantasy inter played into the projection. the object is now just a shade and the response can only go so far. the body has walked and the ghost remains. sometimes the body comes back. you go out with her, have coffee, get into another argument about something. and that reason why the two of you dont get along in real time to begin with is the monster again. and then the body falls back into the screen and becomes the ghost. warhol said, "Isn't life a series of images that change as they repeat themselves?" yesyesyes and people are circles too.

unfortunately, i don't get to caught up in the hyper real beyond the point of interest and the dramatic discourse of it all (you know, knowing people are lying cheating stealing sucking it in, etc) and Smith thinks it is because i am just one of those people that is far too haunted by memories. which is true. i have enough emotional sentiment in real time to find me at my grave. i am a terribly sensory person and i can construct the rooms in my mind where the world has cut me the deepest. those parts are hard to get away from, especially if, like me, you are so remote from your emotions (i locked mine in a room five year ago and i find it scary to try to reach around in the dark for them) that the world is just like watching television. which isnt logical or romantic but more like living in a vault. i am definitely living in a vault but i have a ball in the glass rooms with all my ghosts and good friends that love me for who i am.

Smith said some super nice things to me but mostly he says i should make movies. he says he thinks its the way i'm going to get out. i think it is more than apparent to everyone that i am constantly looking for a way to escape from something. and that everything i do: school photography study film clothes is just a major plot on the grand scale. it is all a way to find my island to pack my suitcase deadbolt the door and fall into the absolute reality of the world with someone that i am completely out of my skull over in real time, without the projection or the ghosts, but with all of the fantasy that only a true moment can bring.

Posted by kristenclanton.com at 10:24 AM

so what don't people who smoke weed realize is going on?>