when i was driving back to the island today, i was thinking about art that i love and houses that i love and i was thinking about wanting a boat and how we got to go out on an old fishing boat last night. riding down the hillsborough river into downtown just at dusk drinking pbr's and watching the baby ducks chase each other. i tried to think of paintings i know that make me feel like last night. i have lived here my whole life and never have i ever taken a little boat from lowry park into downtown, under all those metal bridges that are made so loud. then i thought about what kinda painting would be like my life and i remembered this portrait of dennis hopper that was made from broken plates that julian schnabel did in 1991 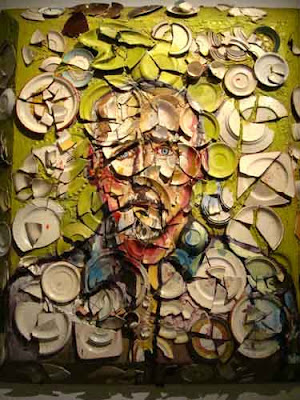 and how i think i would really really really love someone to see me like that or think of me that much to think of that and see it and think, hell, you're right. that's me. but i do not think someone could call me like that, except for maybe my mom or my dad, but that would be cheating i think, considering they know the places i came from before i got there. but people (lets insert boys here, because my girlfriends get me because we are girls and we get it) but since i was a kid boy's i know say they do not know me at all and more often that not it is just frustrated talk and, truly, it is my fault.

my mind always wanders. and at fine times, this occurs when i am driving my car or riding my bicycle and my mind just sorta feels like its shifting from room to room to room with the ebb of the world and the green of the trees and the bay. but other times, like early in the morning before there is any coffee, and im standing in the kitchen in a slip pouring water everywhere while someone else is going on and on about idk something on npr or something in the post or something on the cereal box or some book they are reading that i find too early to even think about talking about, and i just cannot take it in. and it is times like those, multiple times like those,

or time in bars when we are drinking vodka and < anything, really > and you say something sorta pompous like use a pompous word that only someone that went to college would probably know or even care about remembering they once knew and the person you said it to feels sorta shitty and sorta dumb because you made them feel that way. and usually it is either a comment about yourself or a critique on them, so usually i get up and pick songs on the juke box or try to put together a pool game or make a joke about you bein such a damn card to this stranger that is most likely serving our drinks, and you think im shitty for not making someone else feel dumb. but i would far prefer to be dumb, and a poor communicator, than be shitty.

and most arguments and most conversations with people like this just end on the same coin anyway. nothing is ever resolved, the argument never moves past the point that will eventually tear us apart anyway. which is okay, but if we both know this, and that we are having fun, then dramatics are sort of uncalled for and sorta sad and never work out like they should. because in the end, one person does something dramatic some brilliant plan that would only really work if the other person cared even close to as much as the one. but the other never does when it comes to this point. so it is probably better to let your parents or your girlfriends do your portraits and let your boyfriends give you candy hearts and drunk nights at parties where you make out while you're walking back home and feel that it is pretty much the best moment ever. 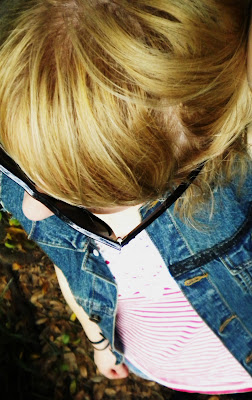 i've been living in sailor stripes pencil skirts cut off shorts motorcycle boots high top chucks and lots of vests for the past few weeks and always on my bicycle. whenever i think about portraits and people i always think of who was the toughest and who was the coolest and how they probably never used words no one knew or never went to places where those words were appropriate, like a spelling bee or an english convention or some other place where people wear pleated pants and plaid button ups, carrying around moleskin reporter's journals talking about words instead of using them and meaning them or even really believing the weight of a word means anything.
Posted by kristenclanton.com at 3:55 PM