Paul Newman: Between the Cat House and the Jail House 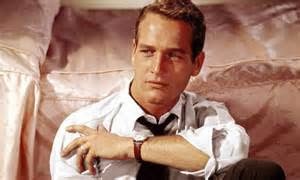 growing up, I was never, ever into blondes, but I had also never seen a Paul Newman film. I defined blondes on film by James Dean, and though I tried to give Dean a fair shake, I am not one for the Rebel Without a Cause mentality; he's too immature. too whiny. and too one dimensional. I love Brando, but he's always bold, always the brute and  always the sex object, which is just as singular a role as Dean's. 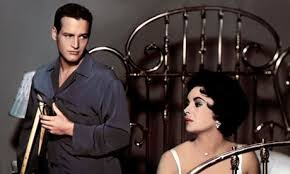 Newman is none of that and all of that. In 1958's Cat on a Hot Tin Roof, Elizabeth Taylor was at her sexual peak: she was the kitten crooner; she was Maggie the Cat. but despite all that, she definitely had to fight Brick (Newman) for the scenes. In particular, in the bedroom. Even though Brick is on crutches, drinking whiskey, sprawled out on the couch or in the background to every one of Taylor's foreground scenes, he is always in absolute immediacy. when Taylor pulls down her silk stockings, after one of those "no neck children" throws ice cream at her, Brick is in the mirror, in the background, stealing the scene. 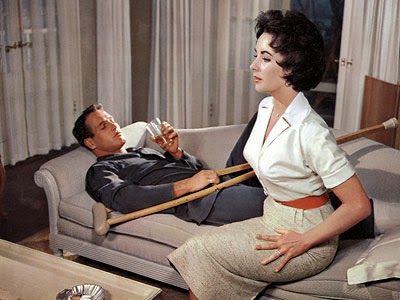 Newman was always tight lipped; he was quiet, pensive and he only said words worth saying, which made him ideal for a Tennessee Williams' play. furthermore, Newman's characters, to those around him, within those scenes, always seemed like the James Dean, the Brando: reckless, drunk, bold and dumb.

but to the audience, behind that famous smirk, there was always something more. there is an image he epitomized: the shake of the head, the sly grin, eyes bold and bright in a sideways glance. his no's were always tentative, and no one around him could ever live up to his expectations:
his characters had a reason for everything, which despite the circumstances between the rich and the poor, the athlete and the war hero, though both are definite drunks, there are vast similarities between his characters of Brick and Luke in Cat on a Hot Tin Roof and Cool Hand Luke.
Newman was always Brick; he was always Luke. 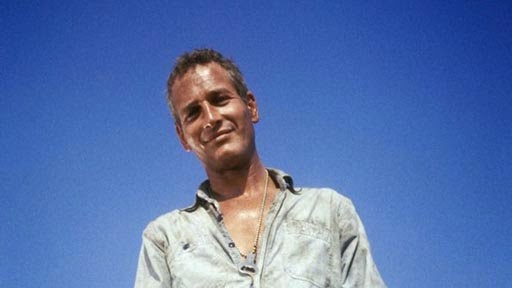 that famous scene in Cool Hand Luke, where he finally let's himself break, after his mother dies, after  being locked in the hole for two days, after he ran away twice and then spent two days digging his dirt out of the boss' ditch and then moving the dirt from his other boss' yard, he is the same person he is after he told his father about dying, after he let the lie out in Cat on a Hot Tin Roof; after he told his dad about love and objects, injected him with morphine. after he let out the ghosts, and everyone had turned away, there was something about Newman's character that let everyone— the characters, the audience— know he still had God on his side, and that Newman, with that cocked head and sideways grin, knew that despite the grimness of the situation, it was all a comedy. 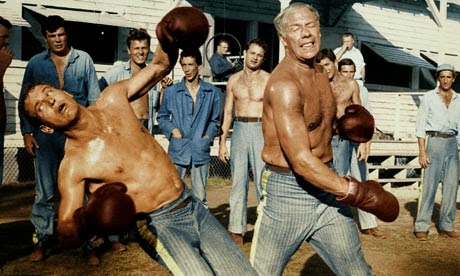 he knew nothing was absolute, which is why, in both Cat on a Hot Tin Roof, and more apparently, in Cool Hand Luke, death becomes the only way to escape— the money, the man, the rules, the family morals, the laws and regulations— because just running is never enough; however, running is in the simultaneous comedy and tragedy of Newman's films. it makes him the banshee, the bodhisattva— it's the gravity and grace, and it's something that the other blondes— the Dean's and the Brando's— of his time lacked. 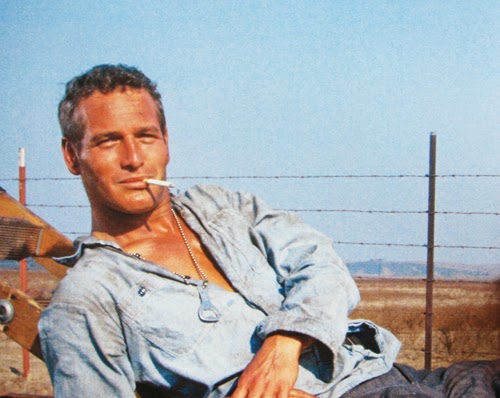 And I didn't even talk about Butch Cassidy and the Sundance Kid.
Posted by kristenclanton.com at 11:36 AM

Newman is definitely the coolest of the three. I'm not sure why he is underrated in comparison, either. Great post!!!!